A Biographical Sketch of Donald Wolfit 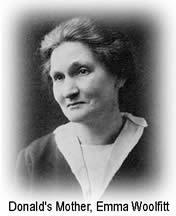 Donald Woolfitt was born in New Balderton, Newark, Nottinghamshire, on April 20th 1902. He changed his name to the shorter, sharper "Wolfit" after he began his stage career. He was the fourth child of Emma (left) and William (below) Woolfitt both of whom came from long established local families, stretching back to John Wolfet, 1571 and William Wolfett, 1583, both of Laxton, Notts.

Emma Woolfitt was a strong influence on her son's life. The granddaughter of William Tomlinson, founder of the Newark Advertiser, she had inherited her own father's gift of reading aloud, and encouraged her small son's talent for recitation. 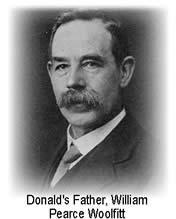 He saw his elder brother, Philip perform in The Pied Piper of Hamlin at Newark's Magnus Grammar School. He was ten at the time but the spark to act was kindled and he thought of little else. His enthusiasm led him into local amateur dramatics, and at the age of fifteen he gave his first public performance at the Robin Hood Theatre in Averham, Notts, a theatre which he supported throughout his career.

Obsessed with acting and the theatre he was never an easy boy to discipline and his relationship with his father, who did not approve of acting as a career, was often stormy. Donald left school at eighteen to become a schoolmaster in Eastbourne. 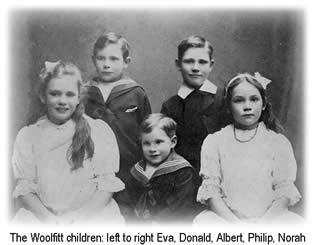 It quickly became clear that a schoolmaster's life was not for him. In 1920 Donald took his class to visit a matinee of Twelfth Night at the Devonshire Park Theatre, Eastbourne. It gave him his opportunity: he requested and was granted an interview with Charles Doran, the actor-manager. A studentship followed lasting 14 weeks. He had begun work as an actor with no wages, no keep and no savings. However, his railway fares were paid. His father received the inevitable telegram:

Donald received the money. But in the following letter his father told him that he had thrown his chances away and could expect no more money.

His first experience of theatre life was in touring around the country, taking Shakespeare to the people. He remained true to this tradition all his life.

Donald's career was forged in the living theatre. The wireless, or radio, had just begun. There was no television, no video and moving pictures at the cinema were in their infancy. 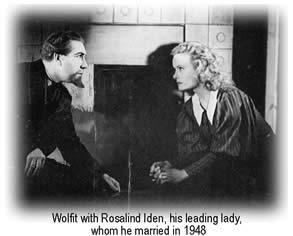 After his success at the Old Vic and at Stratford, Donald's life as actor-manager began. He launched his own company in 1937. Throughout the war, and despite bombing and privation, he continued to tour. His courage and enterprise gave many an opportunity to enjoy great drama. James Agate, the influential critic, wrote of Wolfit's King Lear:

"I say deliberately that his performance on Wednesday was the greatest piece of Shakespearean acting I have seen..."

C.B. Cochran wrote to the Daily Telegraph that:

In Donald Wolfit a new 'giant' has arisen... It is my decided opinion that there has been no actor on our stage since Irving's great days comparable to Wolfit in the great roles..."

Edith Sitwell, after seeing him in King Lear, wrote that the cosmic grandeur of his performance left her and her brother Osbert unable to speak.

He was amongst the finest in a great tradition. For his services to the theatre he was first awarded a CBE and then a knighthood.

After her years at RADA she turned to rep at Guildford, Chesterfield, Nottingham, Exeter and the Lyceum, Edinburgh.

She served the Royal Theatrical Fund for 35 years as director, then vice-chairman until the onset of illness. Wolfit married and divorced Stanley Amis, an architect. She is survived by their daughter.

Jessica in The Merchant of Venice is not a highly significant role but it takes real acting to bring it off with conviction, and Margaret Wolfit gave it all she had. How much did she owe to her father, the celebrated actor-manager Sir Donald? He directed the play and acted Shylock. It was one of his better performances, though not to be compared with his King Lear. What made his daughter’s performance remarkable is that she was a last-minute choice when first she played it.

Just out of drama school, Margaret was asked to replace an actress who was ill. As a result she gave the performance of her life, and without a moment’s rehearsal. In Act II, Scene 6 she elopes from her father’s house at dead of night. Coming out of the house, Margaret found herself in complete darkness. As she told Sir Donald Sinden years later, she sensed that this was not quite right. She moved sideways into a pool of light. As she began to speak, a hand came out of the door. It pulled her back into the shadows. It was her father’s. As Shylock, Donald Wolfit was about to do the famous scene invented by Henry Irving of being observed returning to his devastated house.

There is no official record of her performance as she was a stand-in, but everyone who saw it knew that they had seen an inspired picture of Jessica’s life, perhaps one of the most striking.

Although parent and daughter never seemed particularly close, the conjunction of their roles was unexpectedly moving. Nowhere in the play does Shylock show tenderness towards his daughter. In their single scene together he merely enjoins her to lock up his possessions and not watch the Christian revelry.

When Margaret returned to London after touring the play in the US, Canada and Australia, she played Jessica (evidently occasionally) at the Savoy in 1947.

She went on to play Second Lady attending the Queen in Peter Brook’s The Winter’s Tale (Phoenix, 1951), Ursula in Sir John Gielgud’s Much Ado About Nothing (1951), Phoebe in As You Like It and Lady Falconbridge in King John (Open Air Theatre, Regent’s Park). She also played Mary Magdalene in The Wakefield Mystery Plays (Mermaid Theatre), Queen Margaret to Alan Badel’s Richard III and Lady Capulet in Romeo and Juliet (St George’s Theatre, Tufnell Park). She also played in her adaptation of The Mill on the Floss (Fortune Theatre), Shakespeare’s Dark Lady — Who Was She? (Purcell Room, South Bank) and a one-woman show that she wrote George Eliot — A Portrait (Soho Poly).

She also devised and performed Octavia Hill, the Woman Who Cared, a programme about the life of the Victorian reformer. Other readings included Strange Contrasts, a study in family relationships from George Eliot’s Adam Bede, Felix Holt and Daniel Deronda and I’m Going to be a Doctor, a programme taken from the letters of Elizabeth Garrett Anderson.

Margaret Wolfit was the actress daughter of the late Sir Donald Wolfit. She was renowned for her one-woman shows and she was also the director, then vice-chairman, of the Royal Theatrical Fund for more than 30 years.

Born in London on June 2, 1929, she was educated at Hampstead High School and the Queen Anne’s School, Caversham, Berkshire. She trained for the stage at RADA and then went into repertory at Edinburgh, Chesterfield, Guildford, Nottingham and Exeter, where she played both leading and character roles.

Throughout the fifties she regularly appeared in the West End and among her most notable credits were The Winter’s Tale (1951), Ursula in Much Ado About Nothing (1951), Mary Magdalene in The Wakefield Mystery Plays, Queen Margaret to Alan Badel’s Richard III and Lady Capulet in Romeo and Juliet. She also played Jessica to her father’s famous portrayal of Shylock in The Merchant of Venice.

Her one-woman shows were much acclaimed by both the critics and public alike and included George Eliot - A Portrait, Octavia Hill, the Woman Who Cared, Strange Contrasts (derived from George Eliot’s Adam Bede) and I’m Going to Be a Doctor, a show based on the letters of Elizabeth Garrett Anderson.

She had been suffering from cancer and died on September 20, aged 79. She married and divorced Stanley Amis. She is survived by her daughter.